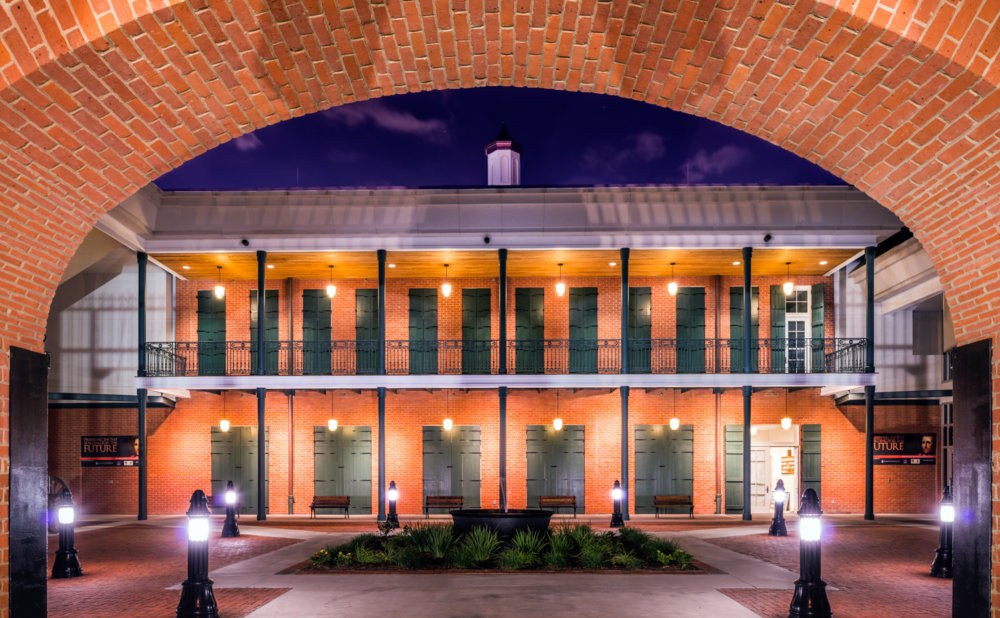 Located in the Lower Ninth Ward, Jackson Barracks is one of the oldest historic sites in New Orleans. Its quadrangle, which dates to the 1830’s, was established to house soldiers and serve as a rallying point in the event of an attack. In 1977, the historic Old Powder Magazine was converted to house the official Louisiana National Guard Museum. An active military site, the campus has been in use during wartime since its foundation.

In 2005, Hurricane Katrina devastated the site, destroying the museum and the rest of the base’s buildings—including SCNZ’s own newly constructed Bachelor Enlisted Quarters—with more than 20 feet of water.

In the aftermath of the storm, Major General Hunt Downer and Colonel Doug Mouton brought forth a master plan to rebuild Jackson Barracks, following the aesthetics of the campus’s oldest components.

Having successfully completed a number of projects on the Jackson Barracks site in the past, SCNZ was selected to completely redesign the new museum building in 2009, replacing smaller disparate museum facilities throughout the campus with a single, purpose-built and consolidated facility.

The challenge of the museum site was to balance two visual languages, matching the exterior to its historic military context while creating a more modern interior that feels energetic, artistic, and open. The design, then, is like an oyster, presenting a hard and unyielding face to the outside but opening onto an interior courtyard with openness and light, aided by towering clerestory windows.

The museum features a central library containing documents and books dating back to the 1820’s and a 300-seat multimedia theater. Built with FEMA oversight, the building is uncommonly adaptive and contingency-ready.

The robust construction of the building allows for hanging airplanes from the roof and driving tanks across the exhibit hall floor, and the construction was accomplished with sustainable materials and high efficiency building systems. The 42,000 square-foot building contains a number of public exhibits as well as significant space for artifact restoration workshops and storage areas for the museum's large collection, from textiles and firearms to paintings by veteran soldiers.

Today, the Louisiana National Guard Museum is thriving. Exhibits on vehicles and weaponry from various conflicts from the War of 1812 to Iraqi Freedom stand alongside artifacts from the hurricane that precipitated the museum’s own rebuilding—including a helicopter that rescued New Orleans citizens from the floodwaters.

​SCNZ has my unqualified recommendation for their exceptional level of effort and outstanding work… They have repeatedly responded quickly to unforeseen conditions, tracked all costs, maintained all of the design schedules, and met all client expectations.